What is Hyperbaric Oxygen Therapy? 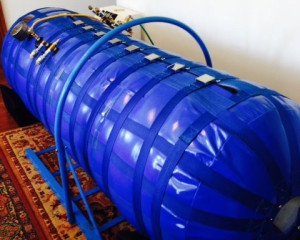 Are you, a family member or someone you know suffering from an acute injury? Or how about a chronic ailment or pain that just won’t go away no matter what you’ve tried?

Hyperbaric Oxygen treatment is a medicine and therapy process that can provide real benefits to improve your quality of life and/or help you resume activities you enjoy more quickly.

Hyperbaric Oxygen Therapy (HBOT) sounds very technical and complicated, but when broken down simply means oxygen administered at an increased pressure. With every breath, the average person living on earth breathes in oxygen at around 21% with about 15 pounds of pressure per square inch. This pressure is measured at what is called atmospheric absolute or ATA. So the 15 pounds of pressure exerted onto the average person breathing in 21% oxygen is considered 1 ATA. In a hyperbaric Chamber, the pressure is increased to 1.3 ATA, 1.5 ATA or even 2.0 ATA and oxygen is administered at 21%, 42%, 65%…… even up to 100%. These increases make it so that oxygen is dissolved into the body’s blood plasma at a rate of 10-15-20 times that could naturally occur otherwise.

Instead of going into detail on the specific science of lightly pressurizing oxygen with discussion of Boyle’s Law and Henry’s Law, we can summarize by saying: when you pressurize the oxygen molecule, it dissolves to allow up to 20 times the normal amount of oxygen to reach pretty much every cell of the body- to help each cell do the natural healing it was designed to do.

HBOT has been used in hospitals as a treatment for burns since 1948. Almost every hospital in the country has at least one hyperbaric chamber of their own. Modern research has documented the results of Hyperbaric Oxygen medicine as a significant force in the treatment of numerous medical conditions. In 1983, the American Medical Association and FDA approved HBOT as primary or secondary treatment for more than 20 medical conditions.

More recently, HBOT has been gaining recognition in Europe and the United States as a treatment of many ailments such as stroke, diabetic ulcers, slow healing wounds, cerebral palsy, brain injury, autism, ADD/ADHD, car or sport injuries, fibromyalgia, infections, concussions and multiple sclerosis.

In the past several years, well known professional football players such as Terrell Owens and Dwight Freeny have used HBOT to cut the recovery time from severe injuries by one-third in order to play in the Super Bowl. HBOT is used before and after surgery in California; for treatment of some cancers in a Florida clinic; for treatment of Lyme disease in several clinics in New England. So many conditions are now being treated by HBOT that it is being predicted that within the next 5-10 years, there will be a separate Hyperbaric Oxygen Clinic in every city in the country with a population of at least 20,000.

$375 unlimited for the week